It’s been about a year since my last post on my favorite shows to watch, which means I’ve obviously watched a bunch more since then. Matt and I have concluded that while there are rarely any good movies coming out these days, TV shows have really upped their game. Hence, we stick to those for the most part, especially shows about murder, true stories and history, or just plain old juicy drama.

In 2017, we discovered many more fantastic seasons to keep us entertained:

Talk about a crazy show. You have a drunk sheriff on the hunt for vengeance in a beautiful small town in Canada. Each episode flips back and forth from the end of the episode to what happened earlier that day and how everything transpired.

The Tunnel: 2 Seasons on Netflix

Murder, twists & turns and an overall psychological thriller. We were hooked to our seats the entire time.

The Fall: 2 Seasons on Amazon Prime

All about your classic charming family man / serial killer and trying to catch him. Creepy, thrilling and the perfect show for all of us crime show lovers.

First of all, Jason Bateman is the lead character, so that’s awesome. While he’s not his typically funny self, he plays a great dad turned money launderer in Ozark, Missouri. Totally want to have a lake day here, just without all threats and drug lords.

Billy Bob Thornton plays a drunken lawyer up on a case against the law firm he originally founded.

A story about a far-too-close family of four men, their mom and their nephew, all living under one roof and doing crazy things like robbing Camp Pendleton.

Did you know that F. Scott Fitzgerald ripped off his wife in a lot of his writing? All of the drama and their volatile relationship unfolds in this show, set in the 1920s with Christina Ricci (Zelda) at the forefront.

The Crown: 2 Seasons on Netflix

The true story of Queen Elizabeth II as a young queen with plenty of royal drama to keep you intrigued. I completely forgot about this show until I saw a billboard on our Thanksgiving road trip. Season two comes out December 8!

If you want to learn the history of Playboy, or just get a new view of the 1950s on, this one’s very interesting. After watching this on a flight to and from Puerto Vallarta, I have so much respect for his story, how he helped start the sexual revolution and his overall badassness.

If you need something on in the background or a few laughs at the end of a long day, this show is perfect.

The Founder of Nasty Gal is featured, chronicling how she started her business by buying unique threads from thrift stores and selling them for 3x the price on Ebay.

90 Day Fiance: Too Many Seasons to Count

When we first put this show on, I thought it was going to be about couples who had recently met and got married really quickly. Nope. It’s about Americans bringing their fiances over to the US on K1 VISAs. And they have 90 days to get married or their counterpart will be back on the plane. SO MUCH DRAMA.

Got some other binge-worthy shows? Send them my way!

So…I’m married!! And the wedding was AWESOME. Getting married in my parents’ backyard was quite the undertaking but it was so worth it for how amazing everything turned out.

Looking back, I have a few tips for future brides: 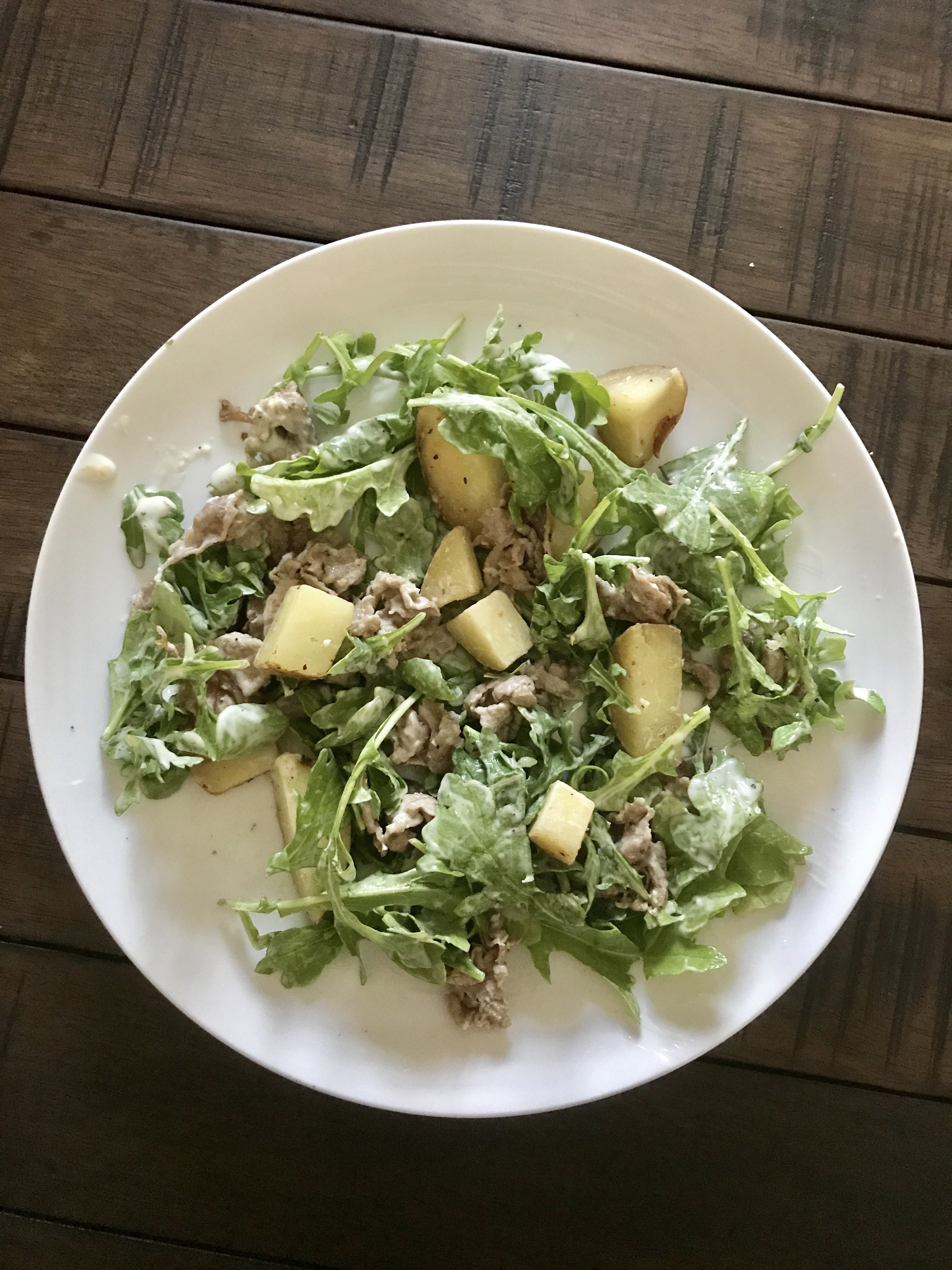 Thanks to a Trader Joe’s taster, I’ve discovered a super easy, filling and delicious salad that I have to share with everyone who didn’t get a sample from the Aliso Viejo location that day…so probably everyone.

Matt has a no-salad-for-dinner rule because he’s always hungry 30 minutes later so any time I can pack enough protein and carbs in one, I’m all for it…especially when it takes 15 minutes to make.

If you try it out, I’d love to know what you think!

When my friend Kala asked me if I wanted to do a juice cleanse with her, I was skeptical and nervous. I am the queen of snacking and essentially eating all day long. But I’ve always been curious about these multi-day cleanses, so I decided to give it a shot in order to give my body a hard reset before jumping into the final 3.5 months of wedding body-ready health & wellness.

However, instead of spending $129 at Pressed Juicery on a 3-day cleanse*, I told her I would figure out how to DIY it ourselves. Using the Pressed Juicery ingredients as inspiration, I structured the cleanse like a couple others I had read about online…greens, citrus, greens, spicy lemonade, CAR, and almond.

Overall, prepping for the cleanse took 1 hour and 50 minutes start to finish. Two hours if you count showering off all the veggie leftovers on me. It was extremely messy. Especially on juice 5 & 6 when I started getting lazy and letting some of the juice pour out of the bottle and into the sink…and floor. Whoops.

I spent $58.13 on the ingredients at Trader Joes, realizing later that Ralphs would have been much cheaper. Duly noted.

*Kala later told me that Pressed Juicery sometimes has specials on their 3-day cleanses for $69. In that case, I would recommend going with that if it’s available and skipping the whole juicing out of your kitchen “messy” method.

I wasn’t feeling in tip top shape after a fairly aggressive weekend, so I ended up only doing the cleanse for one day, and freezing the rest of the bottles. This turned out to be a good thing because I don’t think I could ever not eat solid food for 3 days straight.

On my one day cleanse, I have never peed so much in my life. Crazily enough, I was down 3.5 lbs by 5 pm. How ’bout that water weight? Since then, I swear my stomach  shrank so I’ve eating more proportional amounts and much healthier overall. One day was pretty easy and did the trick. I’ll take it!

Overall, I think the cleanse was a great way to purge the toxins and start me on a solid health spree. I plan to split the last two days of the cleanse later this summer when I’m feeling I need it. If you can stomach to do three days, more power to ya!

In the spirit of the sunny summer days ahead, I’ve compiled a few of my favorite songs right now. Most of these aren’t exactly “new” but nevertheless, I can’t stop listening. Hopefully you’ll find one or two you like and hadn’t heard before!

What originally started as a recipe blog for college students has turned into a blog about all of my favorite things: travel, diy, lifestyle and of course, photography.

I blog about it all to remember the things I’ll forget and to take note of the things I do & love. And hopefully along the way, someone else will get use out of the things that I think are pretty awesome.

Thanks for comin’ along for the ride!

For the past 26 days, we’ve been out of our house while renovations take place (obviously don’t want to be living amongst all the toxic fumes) so the last few weeks have been a been hectic moving from hotel to hotel to Airbnb to my in-laws and back to a hotel for a long staycation. . . Thanks to my amazing husband who is SUPER on top of it, this project is running ridiculously fast for the amount of work we’re having done and we got to move back in last night! . . We may not have an actual kitchen for a couple weeks and I may spend the next two weeks dusting every single item in our house (closets and plastic did not help)...but there’s nothing like home 🥰#homerenovationproject
The day after we found out I was pregnant (which seems like forever ago now!), we trekked up to @rockynps for baby’s first National Park visit! Swipe to see who was more pregnant 😂 // COLORADO
Anyone else obsessed with olive trees? 🙋🏼‍♀️ I am REALLY hoping we can plant one in the backyard eventually because I love the Mediterranean look!
With lots of family & friends up north, my mom hosted my baby shower tea party a few weeks ago. Swipe to see her super cute homemade carrot cake cupcakes 😍 So excited to see the rest of my babes at my OC baby shower this coming weekend!
My favorite stroll in OC 😍
2019 was so good to us. Looking forward to all the changes that 2020 will bring with our little baby girl. Happy new year everyone!! 🥳